This morning I was listening to an essay on the 45th Verse of the Tao Te Ching by Wayne Dyer. A poem by Meister Eckhart was quoted on this “man-God” subject:  “Every object, every creature, every man, woman and child has a soul and it is the destiny of all, to see as God sees, to know as God knows, to feel as God feels, to Be as God Is.” (Change Your Thoughts Change Your Mind, pg 221).

Musing on this poem,  I was led to another piece of literature that I site in my book, Perfect Brightness of Hope, Appendix II, page  220 [Cedarfort, 2012 publication]. Though too lengthy to quote in this blog, Apostle Matthew Cowley, in one of his many speeches relating to AA and alcoholism,  references the Lorenzo Snow saying in conjunction with a man he heard testifying in an AA meeting.  (Yes, Apostle Cowley was a fan of, and occasionally present in AA Meetings.) Cowley describes the situation in the man’s own words: “Five years ago I was in the gutter, degenerate, demoralized, and had been drunk for ages. . . . wife and kids left me, lost my home and I was just turned loose and down in the gutter.” Then the man stated that AA had got a hold of him and that his life had changed dramatically.  He became active in his church, and eventually went to the LDS Temple and was sealed to his wife and children. Apostle Cowley quotes this man’s final words as he heard them in AA meeting that evening: “Fellows, from the gutter to the temple of God in six years. You are looking at a God. As God now is, many may become.”  [Matthew Cowley Speaks, 340-341]

For a few of Brother Cowley’s wonderful speeches given about AA and to “the AA” as he called it, refer to my appendices II, Understand the Less Fortunate, in Perfect Brightness of Hope, pages 219-228.

On a daily basis, I review a “Thought,” “Meditation,” and “Prayer” for the day provided in a  small book entitled 24 Hours A Day (Daily Readings for Alcoholics.  Available on Amazon and other book stores.) In my course, Living @5, I review The Meditations for July 29, 30, and 31st as support to the Living @5 Model. This model is provided by a simple photo I took yesterday of  my whiteboard presentation.  Spend a moment thinking about this simple concept.  I offer them to you with love.

July 29:  There are two days in every week about which we should not worry; two days which should be kept free from fear and apprehension. One of these days is Yesterday, with its mistakes and cares, its faults and blunders, its aches and pains.  Yesterday has passed forever beyond our control.  All the money in the world cannot bring back yesterday.  We cannot undo a single act we performed: we cannot erase a single word said–Yesterday is Gone!

July 30:  The other day we should not worry about is Tomorrow with its possible burdens, its large promise and poor performance.  Tomorrow is also beyond our immediate control.  Tomorrow’s sun will rise, either in splendor or behind a mask of clouds–but it will rise.  Until it does, we have no stake in tomorrow, for it is yet unborn .

July 31:  This leaves only one day–Today! Any man or woman can fight the battle of just one day.  It is only when you and I have the burdens in those two awful eternities’–Yesterday and Tomorrow–that we break down. It is not the experience of Today that drives men and women mad–it is the remorse or bitterness for something which happened yesterday and the dread of what tomorrow may bring. Let us, therefore, live but One Day At A Time. [24 Hours A Day.  Meditations For the Day:  July 29, 30th and 31st.] 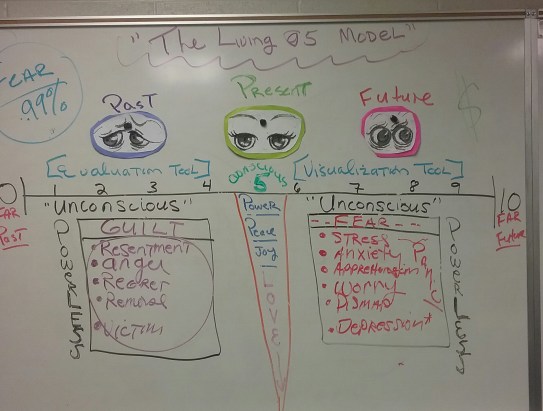 (ps. My sweet wife Vickie Lee provided the sketches of the 3 sets of eyes in the photo.)